By mid-morning we were watching the latest snowfall. She got up off the couch and told me she was going out to a fabric store. “Can I come along”? “No, I need to get out by myself for awhile.” I started singing Alone Again by Gilbert O’Sullivan, but she never even looked back. Well that’s just fine then. I’ll put my new snow boots on and go track through the wilderness. It had just snowed about an inch and a half (half inches count too, ya know). There weren’t any fresh tracks on the side walk as I quietly looked for the presence of the usual bears or cougars that might lie in wait around the fence corners as I explored Free Solo!

I caught myself watching an ice fishing tournament in Wisconsin yesterday as I rooted for my new favorite elite guy.  After all, how many gargantuan smallmouth do you need to see Zona and KVD catch this winter?

My son is in Hawaii and I have buddies fishing down in Arizona, but me – I have become one with Netflix! I hadn’t bought any new lures for at two weeks, so I sat down and decided to “stock up” on some new stuff. After all, she wouldn’t be back from the fabric store for at least two or three hours.

Well, there’s all kinds of new “can’t miss” stuff out there, right?  So I jumped right in to the heart of those internet tackle stores while still wearing my new snow boots.  Cause the good Lord knows I won’t be able to catch a bass without reloading.

To my surprise I found all kinds of toys that I didn’t have and so I thought I’d share with you today.  Although I might have to keep this short as a new Netflix series starts in a few.

So let’s get started – and no laughing: 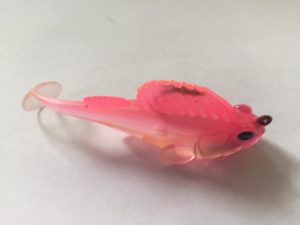 Of course I also ordered the Dark Sleeper in another 13 popular colors.  You know just in case.  Not meant to swim, but bottom weighted to “hop” along the bottom.  Doing so, of course, insures you’ll never hang up and lose it. 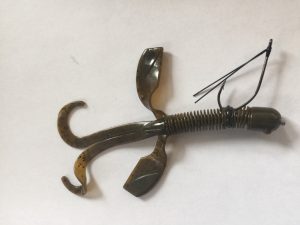 You can tie just about any plastic on with this Neko hook, ring, and weighted insert to have this beauty ride tail up as you creep and hop along the bottom.  I guess there are folks out there (at least in Japan) who swear by em. 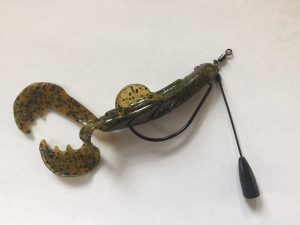 Not real sure where this one originated from, but Ike swears it works.  I know it does too, because i watched it on YouTube.  The idea is right though, as it keeps the plastic right at eye level for those 6 lb smallies.  And…by the time you add tungsten weights on them, how much could they cost anyway.  I’m beginning to notice a lot of green pumpkin colors – WTF?? 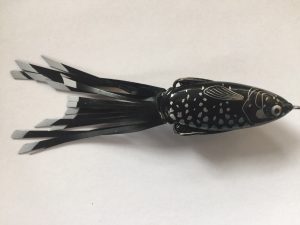 Had to take a picture of one that wasn’t in green pumpkin so you’d know that color is not important to me.  Saw Zona catching em like crazy on TV.  Don’t you know the Potholes bass are on point just waiting for this once the ice comes off in June. 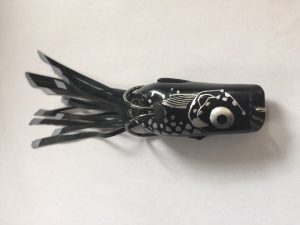 I’ll bet you’re thinking that black works in the Potholes.  Same basic idea as the Pad Perch, but creates that popping noise some of you feel you need.  I like that huge eye! 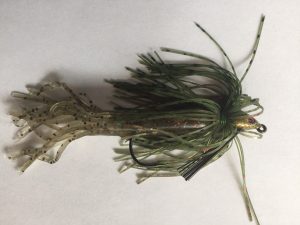 For those carrying all that gear and don’t know what to do with it.  Sure looks good though! 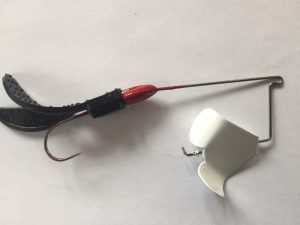 Not even sure if that’s the name, and I didn’t have a frog to put on, but you get the idea. Probably great with a Zoom Toad. 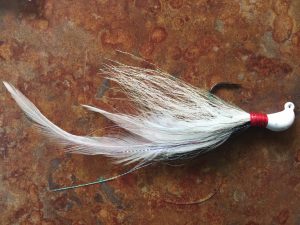 I’m guilty of making this one.  Supposed to be excellent as it’s zipped (3′ at a time) along the bottom instead of swam or worked like a typical hair jig. 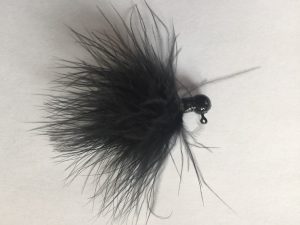 Another homemader.  To be swam slowly mid stream.  We’ll see.

Okay then, that concludes my new seasonal toys.  Just writing this got me excited to get started…until I looked out the window.  Guess it’s supposed to start getting into the forties and fifties soon.  Who needs Hawaii and Arizona?