I could see there wasn’t going to be any way to predict what kind of weight would be needed in this deal.  First of all, to advance on to the Classic, you had to beat the rest of the anglers in your division.  In my case, the Western Division which included anglers from other countries.

The second issue was that while fishing had, in fact, proved difficult on day 1 for most, a giant was still possible as evidenced by a couple of bass brought in that went over 8 pounds.  The prime example of this was the angler sitting in 2nd place, had 2 fish on day 1 for over 12 pounds – one of which was over 9 pounds.

So while part of me said, just fish for one fish at a time, try to get a limit and see where that puts me, the other part of me felt I needed to do something to give myself a chance for a big bite.  Problem was, I felt I was already doing that.  Bigger bass tend to live and feed near isolated, unique cover.  I had both of those boxes checked off.

As far as I could tell, conditions on this day would be nearly identical to the day before (hot, humid and calm).  That was good since those were the conditions I was finding most productive.

I was much more at ease on day two.  I wouldn’t say confident, but internally at peace with what I had to do and that I wasn’t going to embarrass myself.  In my mind, I had a very simple approach.  I had two or three rods out on the deck, compared with the stacks of rods that many others were trying to negotiate.  I wasn’t worried about other baits or other colors.  Since I had really gone through on day one and studied how the cover laid out, I felt day two was about being precise and efficient.  Digging through baits and changing colors throughout the day wasn’t part of that plan.

I also wasn’t nervous about anybody being at either of the two areas I wanted to fish.  After several days of worrying about it, it was apparent that what I had found wasn’t popular for whatever reason.  Maybe it only held a small population and I would find that out on this day, but I didn’t really believe that.  As long as conditions held, I believed those areas would produce.  I only need five after all, and that prefish five-pounder had me believing that bigger bass were a possibility.

I was going to repeat the same process as I had on the first day.  Run to the Gator Hole, fish it until I didn’t get any feedback and then run in behind Long Island and finish out the day.  My sense was that the Gator Hole, being smaller and more protected wouldn’t tolerate as much of my presence as the island would.

I had about 300 yards of shoreline to work at the Gator Hole, but it was a methodical process.  I was attempting to fish “fast-slow”, meaning I was moving the boat slowly but making pitches at a quick pace.  “Pick it up, put it down” was my mantra.  Such as hours on end by yourself will get you to do – start chanting to yourself under your breath.

I did a lot of pitching on the 2nd day at the Gator Hole, but only managed to catch a couple of sub-12 inchers.  So after two hours, I left it and made the run to the island.  I don’t know what had changed there that day, but I didn’t want to start digging through other baits until after I checked the island.  I was confident in the tube still.

Making the quick run to Long Island, I pulled alongside the island, about 100 yards down from the point of it.  A fellow competitor was along the opposite bank from the island.  A camera boat pulled up beside me after a few minutes and asked how I was doing.

“Nothing yet”, I hollered back.

Shortly after, as the camera boat sat outside of me taking pictures, I pitched to a prime point of cattails that made a clump all to itself.  Just off that clump was some floating cattails that formed a small mat.  My pitch pierced that small mat just off the cattail clump and the water immediately boiled.  I didn’t feel a thing but trusted that the boil meant that she had it.  I reared back and was greeted by a hefty surge on the other end.  Luckily, she bolted away from the cattails out towards open water and I worked her around the trolling motor to the driver’s side of the boat.

I remember that fish taking all of the pressure off since it would weigh nearly as much as a limit of little guys would.  It wasn’t even 9 am and I felt that anything caught the rest of the day would be a bonus.

One fish at a time…” pick it up and put it down” I chanted.

The rest of the morning provided steady action.  I worked slowly, up and down that stretch of the island expanding with each pass and adding a 40-50 yard piece at the ends.  I picked up a fish every 15 minutes or so, but nothing over 3 pounds.  Still, by noon, I knew I had a much better limit than day one and needed to make a decision about how to use the rest of my day.

Do I stay and hope to cull up even more or do I move on and look for other areas in case I need them the next day?  It was a tough call to make at the time but looking back on it, it’s one of the decisions I regret the most.

Since my last several fish hadn’t allowed me to cull, I decided to move on and make sure I got back through the canals back to Lake Dora.  That would take almost an hour and then I would spend the remainder of the day near the weigh-in looking for similar looking cover on Lake Dora.

I found some of those areas on Lake Dora, and caught a couple more 12 to 13 inch bass that didn’t help me.  The areas on Dora that I liked were a bit more scattered…one here then one there.  Little pieces that were 20-40 yards each.  Then you’d move a quarter of a mile and find another little piece of broken up cattails.  It was just “okay” but nothing I was going to count on for the last day.

I decided to have some fun with my big fish at weigh in, hold it up and show off a bit before I took it to the stage.  What the hell.   I was one of the first to weigh-in.  Unfortunately,  don’t have any video of that day’s weigh-in, just a few photos. 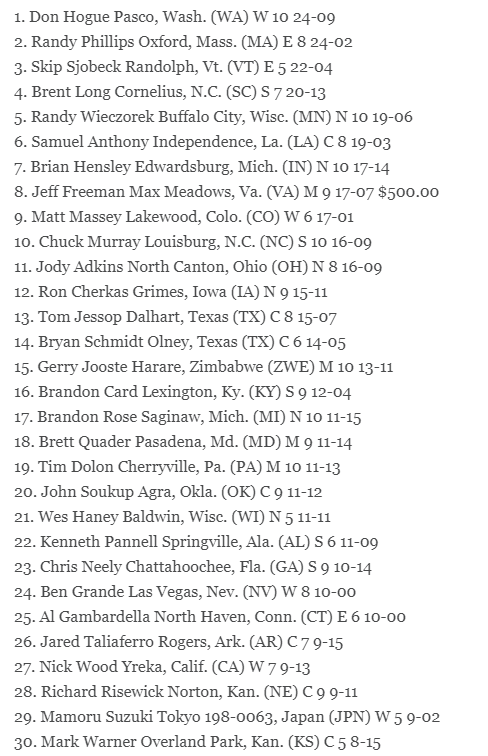