Get caught up on the earlier parts of this series below:

Imagine a game of golf where the length of the hole, bunkers and pin placement changed as the game was going on. But that hole only changed after it was played by someone.  The distance to the green was lengthened or shortened, the pin placement changed and bunkers changed position and were not raked smooth.  Divots were not replaced.  If a hole hadn’t been played yet, then the distance, pin and bunker placement were known and could be played accordingly.

Hopefully, I had a hole or two to play alone.

Floating in the darkness as I was waiting for blast-off, I remember thinking this is it…this is my last tournament.  I am out of my league, a long way from home and clueless.  Even though this was only a “federation” championship, these guys had sponsors, had names I recognized, were obviously confident and knew what they were doing. 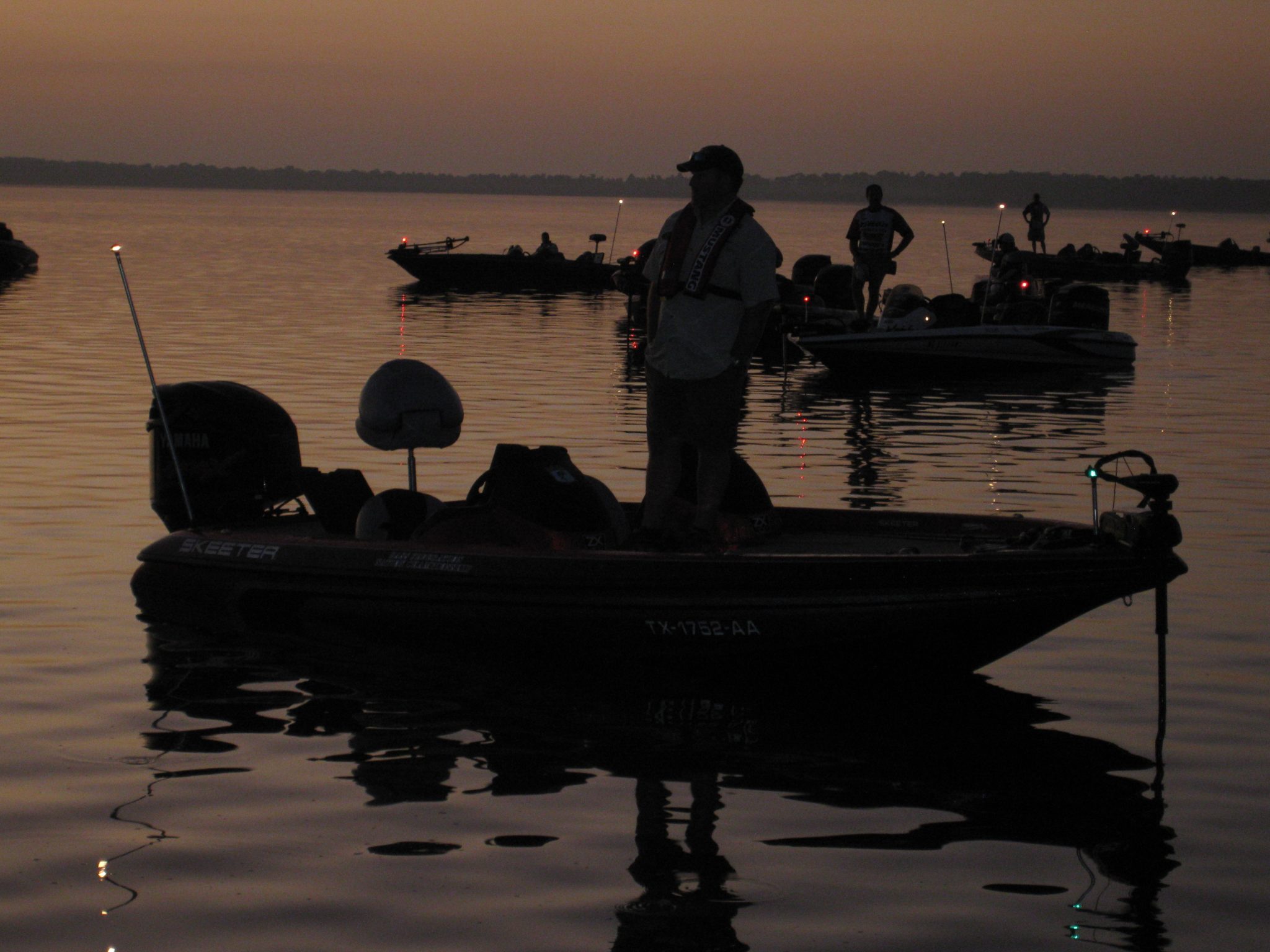 My goal was just to save face.  To not come in empty-handed.  One 12 inch bass was my goal.  To make sure there was something in that bag when I handed it to Trip.  To make sure that my wife wouldn’t have to pat me on the back and say, “that’s okay honey.”

Confidence is a deceptive emotion.  I know I’m supposed to be telling you about how I knew that I was going to catch them, that I believed in myself.  But honestly, I felt there was a good chance I wouldn’t get a bite.

Everything about my attitude was wrong.  I was planning on my exit from competitive fishing before I had even blasted off on the biggest event at that point in my life.  But in a strange way, my fear of failure was motivating me into a laser-like focus on catching ONE fish.

As we had our numbers called and idled away from the docks, I started guessing the odds that the “gator hole” would already have a boat parked there.  It had to be at least 80%.  No way guys would overlook that area.  The only two reasons why they wouldn’t be there were bad news for me.

First, it wasn’t a very good spot and I just got lucky with a couple of bites there.  After all, I probably spent 15-20 minutes there and very few casts.  And this was the place I was counting on?

The second possibility was that fishing wasn’t so tough.  It was just tough for me.  What I had judged to be a good area because I had actually gotten bit there was just another spot.  There were lots of areas that were better than that, I hadn’t found them yet or just hadn’t realized it when I was there.

Those long idles through the canals were only more time for all these scenarios to run through my head.

Coming out of Dora Canal, I made the short run across Lake Eustis and into another canal that connected to Lake Harris.  More idling.  A few boats peeled off here and there.  All to either enter other canals or fish some of the well-known areas.

With much of the field running nearly identical boats, there wasn’t going to be a lot of passing that happened.  So as I left that last canal and headed out into Lake Harris, I pushed that throttle all the way down (no “hot foot” in these boats) and hoped for the best.  It was the first time I had really opened up this boat for an extended stretch and it felt like I was flying.

The agonizing thing about this run was that I wouldn’t be able to see if anyone was there at the gator hole until I was there since it was somewhat hidden behind a small point in Little Harris.  As I crossed under the bridge that divided Lake Harris from Little Harris, I could see that point and my sense of moving fast had gone away and now it seemed to take forever to get there.

Finally, as the shallow cup beyond the point came into view, I realized nobody was there.  Sweet!  Alright, let me get one keeper here.  The five-pounder I had caught there seemed like such an accident that I didn’t really even wish for that.

I came in as quiet as possible just inside the point and tried sneaking up on that first section.  I would fish it thoroughly, really try and pick it apart.  This wasn’t the usual team events that I most often fished where you purposely leave stuff for your partner.

Within the first ten minutes, I had a bite and set the hook.  A helpless twelve and a half incher came shooting out of the cattails and straight into the boat.  I caught my line mid-air and you would have thought I won the Classic.  Nobody to high-five or hug, but I was never so happy to see a pounder in my life.

Now my mind kicked into another gear.  That was one, now just get one more.  I went into a zone, where it was just about catching one fish.  I didn’t worry about weight, or where I needed to go next.  I was pitching that tube as fast as I could, but not missing a single spot.  I was totally engaged with how every cattail laid out, the subtle points and pockets and the cattails that were floating creating mini mats.  The sun, the shadows…all of it mattered.  I was moving very slow and steady on the trolling motor, careful not to make the water move much ahead of me and trying to position myself so I had the best angle based on how those cattails laid out.

And so I made work of this for the next couple of hours, one fish at a time.  I caught 8 or 9 in that time and culled up several times.  I had nothing huge, but several fish over two pounds.  I was still just focused on the next fish and culling up if I could.

There were about 300 yards of that cup that I felt looked the best.  Eventually, the cattails would transition to straight Kissimmee grass and I would turn around and go back through it.  When I made a pass without a hit, I decided to go see if anyone was on the backside of Long Island in Lake Harris.  It would only take me five minutes or so to check, and now that the gator hole didn’t seem too popular, I felt confident I could come back to it.

While I saw a boat on the opposite bank from the island, nobody was working the island itself.  This really confused me as I felt this was about 1000 yards of some of the best looking stuff I had seen on the Harris Chain.  This cattail pattern I was using must not be something that was popular or I was just getting lucky on not running into others trying it at the same time.

Looking ahead of myself down that stretch of cattails, I realized I hadn’t checked much of this out.  There was a lot to this area and it would take me several hours to go through it.  Immediately, I began catching fish.  The only problem was they weren’t any bigger than the ones I had.  After four or five fish, I decided to fish through things a little faster, not wanting to burn up all those fish, but still wanting to really understand the area and locate unique features there.  I had a sense that I was going to really lean on this area the next two days and wanted to be familiar with where everything was.  I was prefishing for the next day.

I ended up spending most of the rest of that first day along the island.  I did make a few culls, but only by ounces.  I made one last check of the gator hole, but only caught one that was less than 12 inches on a lipless crank working offshore from the cattails.  I tried working a variety of baits in and around the lily pads there, but with no success.

Heading back to weigh-in that day, I had no sense of where I would be sitting and don’t remember caring much.  I was just happy to have something to show Trip and that I wouldn’t be empty handed coming up to that stage.  All of my doubts had mostly disappeared and I felt good that I had fished well that day, one fish at a time.

I had played the holes alone that day.  Along the way, I had studied all the pin placements and gained a better understanding of how to set up for the best shots on day 2.  I still didn’t know what “par” was going to be, but I knew I was many shots better than my practice rounds.