Let’s start with the .   No.  Fate should never take a back-seat.  Best to illustrate this with a timeline:

A Limit Out BBT isn’t what I thought:

Conditions changed from the useless prefish I had the weekend prior.  Water is staining up from a bloated Snake River.  Wind is forecasted.  Water levels were fairly low. Could go lower.  After flipping reeds and cranking, I’m 2 hours in and a couple smallmouth have taken lazy swipes at an orange squarebill.  Why did I sign up for this punishment?

After a move, my 2nd cast results in a hideous spinnerbait graciously entering the water within a few inches of a boulder.  I turn the handle once and the vibration of my spinnerbait was felt momentarily.  A line that just came tight, went completely limp just as fast.

A single angler using a net is a liability.  With a 6.3lber in it, I struggled with just one arm to lift it into the boat.  It jumps out of the net, turns its head and takes me for a 1/2 lap around the boat.   I sit down in the driver’s seat and cradle it.  It’s 8:40am.  Head back to weigh by 9:00 or stay and see if I was onto something on this boulder pile?  Dropping water could leave me stuck.  If the fish goes belly up, that would be catastrophic.  Easy call. 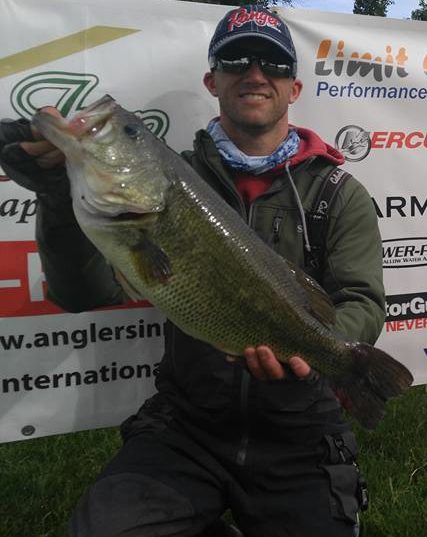 I’m off pad, near the dock with 7 minutes to the hour.  The chatter between 5 boats is amusing.  “what you got”?  “I got one well over 5”.  “Lets see it”.  “Lets see yours first.” (3 boats leave immediately 2 remain) “I’ll show you mine, if you show me yours.”   WHAT THE HELL KIND OF PARTY IS THIS?  We are now playing cards it appears.   Immediately I have an internal ethical debate.  Expecting accurate estimations, let alone genuine honesty from competitors involving cash, felt like a fool’s errand.  I would be as transparent as possible, whatever that meant.

Coming to the first hour with a “full house” helps learn the poker game for free.  Seeing the fish that leave, the reactions to the conversations and how long it took for those reactions to take place was telling.  I tried to ingest it all.  I could see a use for this data if I had 2 or 3 fish in my livewell.

After hour 1 victory pictures, I make a quick detour upriver out of convenience.  It’s not happening.  Lets get back down to the zone.

The Alpha Angler Custom Spinnerbait rod is now alone on the front deck.  I need to add one more big fish offering that can pick apart deep water, rock and weeds.  Jig sounds good, but I’d need one that I don’t care much about.  Edwin Evers’ face flashed in my mind as I recalled the jig I bought that looked like bear shit.  I could care less if I break that thing off.  I’d need a trailer for muddy water.  At wide open throttle toward the area, another idea hits me like a Peterbilt crossing a center line.

The franken-bait I melted together for the club tourney at Irrigon back in April.  It is sitting in my tray next to my hotfoot at the bottom of the boat.  It’s buried.  Somehow I find it.

As soon as I tie it on, I want to cut it off… I’m really hoping they are still biting a spinnerbait. 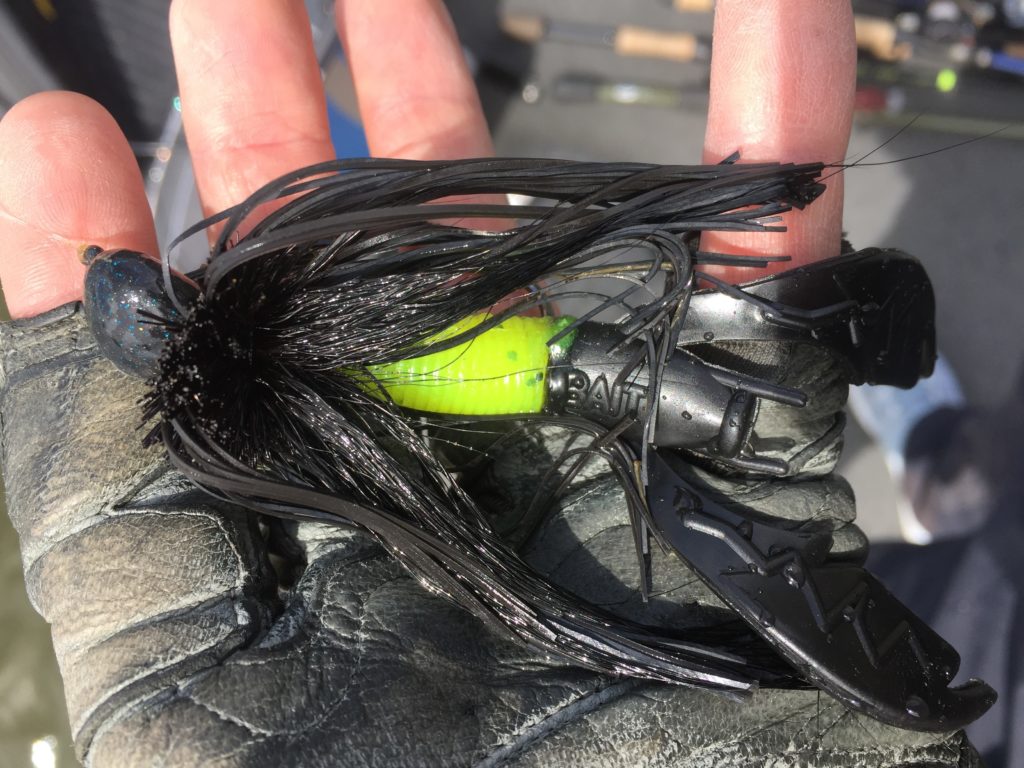 I start with the spinnerbait and it secures a good one, but the jig is what catches flame.  I would fill my 3 fish limit.  Weigh an hourly winner, then run back and replace the fish I just weighed in almost no time.  Just as fast, it was done.   I’d get 6 good bites all day. 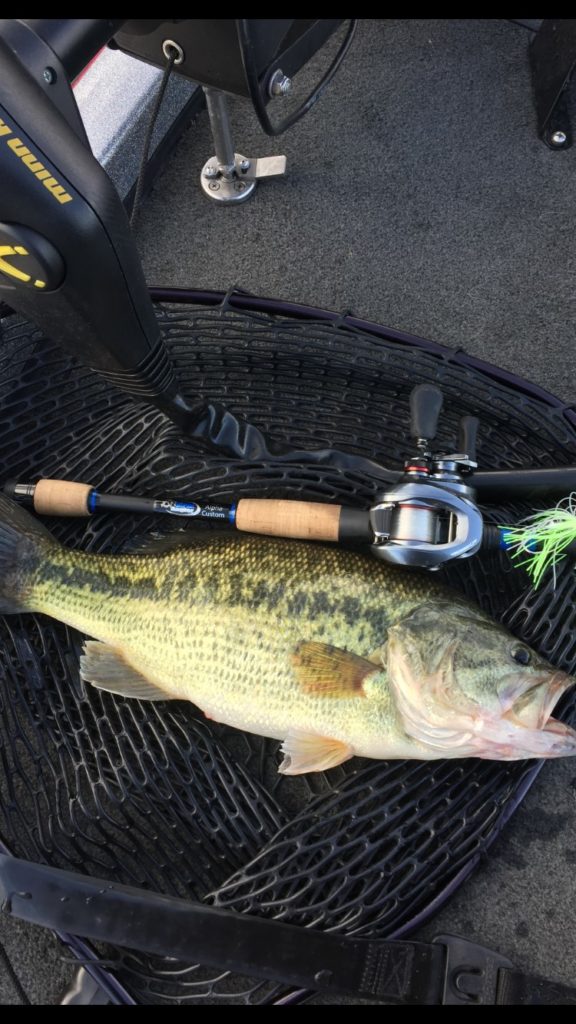 At this point, I was happy with 2 hourly checks. I think there were 4 hours left, and I had 3 solid fish in the livewell.  I was committed less to fishing at this point, and thinking about a plan to win 3 of the last 4 hours with what I had.  My area closer to the ramp felt shut down and I wasn’t going to try to enter my other area packing 3 good ones because I could have gotten stuck.  Not worth it.

I’m headed back to the dock when I remember the extra weigh bag I had put in the boat for my BASS Qualifier co-anglers.  The bag is gin-clear.  Clear bags magnify what is inside.  I had already weighed two giant fish.  If I put any fish of size in this clear bag, people are going to think it’s a giant too.

I’m not sure if the clear bag made any difference in results, but it was a highly effective tool.  It would dissuade people from weighing their fish.  They’d question their own eyes and error on the side of caution by conceding the hour.  It would make decision making difficult for everyone but me.

A guy claiming he had a 5.12 Yakima River fish kept coming to the scales.  He was sneaky with it.  Wouldn’t let anyone see.  For about 4 hours in a row he folded his hand hoping the competition would be smaller the next hour.  In the 2nd to last hour he was fed up.  He ignored my plastic bag shenanigans and put it to the test.  He had oversold the weight and came up a couple ounces short of a 4.63lb largemouth.

The final hour has no chatter.  Weigh what you got.  I put a 4.3 on the scale that I’d been carrying.  It edged a 4.22 for my 5th hourly winner.  Had the fellow with the smallmouth waited, he would have won the final hour by about a quarter pound.

Russ Baker and Limit Out ran a great tournament.  His wife and others who put in the time to organize it are appreciated. He had me re-cap my day with a speech.  It was kind of a ramble, but it was really honest.  I think it went a little bit like this:

I don’t know about fate, but if you go back and re-read the timeline, it is odd how things piece themselves together. 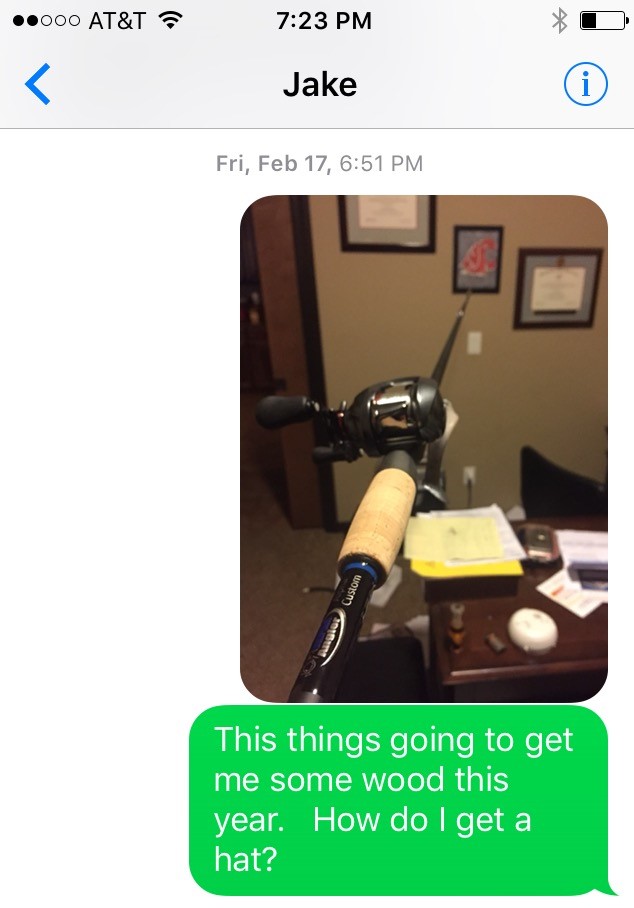