Looking to improve your skill set and knowledge of fishing? Of course you are.  You might want to think about spending some time on the “back deck” of the boat.  Step out of your comfort zone a little.  Keep in mind that this doesn’t just apply to tournament fishing.  Any on the water time with a friend, relative, or even a “pro”, can all have a positive impact on how you approach your next outing on the water.  In this post I plan to walk you through what it means to make game time adjustments.  For starters let’s go back to the very first day of the very first tournament I had ever fished from the back of the boat.   Stepping away from the trolling motor and witnessing how things were done by those who were considered “Pros”, was my plan. It wasn’t easy, but extremely educational, and at times absolutely hilarious.

During the winter of 2004 I found myself wondering, like most of us, what techniques or knowledge was I going to expand on for the upcoming 2005 season.  Fortunately at that time there was a strong presence out West with a Pro-Am series that traveled through California and Arizona.  Up until 2005 I had never participated an event like this, nor had I fished from the back of the boat.  I liked running the trolling motor and the thought of not even making a cast past the drivers windshield bothered me to say the least. Thus, my dilemma.  I really wanted to see how things were done at a higher level but could I stomach the thought of doing that from the back of the boat.  Don’t get me wrong there were plenty of good sticks in the NW at that time, but I wanted to witness how some of these legends out West had achieved their status.  Looking through the 2005 schedule I picked one event and I went for it.

The CA Delta it was.  I had heard a million stories, read a million articles, and of course watched some epic shows and videos of the notorious CA Delta.  Names like Bobby Barrack, Mike Tuck, Robert Lee, and Fred Roumbanis were enough to get me to sign up.  The date was set May 4-7 2005.  Up until this time I had never been to the CA Delta.  I had no idea what to expect other than the mythical stories I had heard.  Little did I know at the time I was going to witness first hand what the Delta had to offer.  Fortunately for me though I didn’t have to show up and try to tackle this massive fishery blind.  Unlike most of the anglers for this event I had a good friend fishing the pro side and I was able to spend a couple of days on the water with him during official practice.  During this practice time I began to notice some things.  One, the Delta was huge, two everything looked good, and three there was this secret network of anglers who help each other. (we’ll discuss this more in another series)  Cool I thought, I was going to have a front row seat, at least for a couple of days, at how these anglers approached their day on the water. 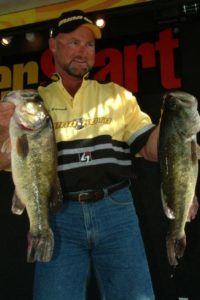 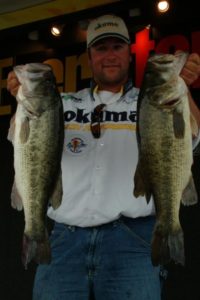 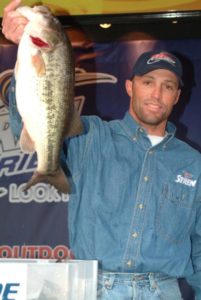 Fast forward a little and day one of the event was finally here.  I was excited to say the least even though practice was at best a nice boat tour of the delta.  Day one partner, was an older gentlemen, that appeared on the outside to be a seasoned vet.  With a calm and pleasant forecast I didn’t think that his older Champion was going to be put to the test.  The deeper V of this boat wasn’t going to be needed but some bigger livewells surely were.

So off we went, leaving Russo’s Marina we headed out in to Franks Tract.  Franks Tract to some would be big enough, but at the Delta it was just one small piece of the puzzle.  After reaching our first spot I quickly realized that fishing from the back of the boat was going to be a big adjustment for me.  Creeping along a south-facing bank I took a moment to just take it all in.  As I watched the pro up front I quickly recognized that he was only pitching to a clean spot here and a clean spot there.  I asked myself, why is he only pitching to clean spots that are so far apart?  What is wrong with the ones in between?  We weren’t moving along very fast and in my mind there was plenty of time to hit most of them if not all of them.  So that was my plan.  Game time adjustment.  I did what most of us were doing back in 2005 and I picked up a Senko. I started pitching to every pocket I could.  Let it fall, one twitch, and then pick it up.  I was trying to hit all of the ones I thought the pro was skipping.  Well apparently I did.

Shortly after I started this cadence I went to lift up my Senko and the Delta pulled back, and she pulled back like I had never felt before.  Keep in mind this was only like the 5th or 6th pitch I had made all day.  We weren’t even 20 minutes in to the day and I was getting my butt kicked by a giant fish of some type.  A giant what though?  I had no idea that this was even a bass.  Slashing through the tulles and matted grass this fish started to feel like a giant carp hooked in the tail with a trap at Casey’s.  Was it a carp?  Was it a striper?   I had no idea, I still hadn’t seen this fish.  All I could see was this giant clump of grass racing around the boat. Now comes the first of many laughs.  I looked to my left and here stands this pro holding a salmon net.  Yes a salmon net and I started laughing.  Only for a second though and then I quickly realized that this pro was a genius.  With a two-handed scoop he netted the biggest clump of loose grass I had ever seen.  This pile of grass had to weigh 50lbs at least.  Ripping through this pile of grass I was dying to see what it was.  Yep, a giant largemouth.  10lbs 13oz. of Delta gold to be exact.  I couldn’t believe it.  Not only was this now my new personal best it was the first bite of the day.  What was next? How could it get any better? I couldn’t wait for the next 7hrs and 30 minutes to unfold.

New problem, how am I going to fit this bass in these notoriously small older Champion livewells?  Talk about going from excited to nervous in about 2 seconds.  How was I going to keep this fish alive knowing that I would have to fold her in half just to get her in the livewell?  Well I did, and I continued to check on her every two minutes for the rest of the day.  Now it was time to once again sit down for a minute and take a deep breath.

After getting myself collected I picked up my rod, made a couple of pitches, and bam another one.  This one felt just like the last one.  She wasn’t 10lbs but, she was 6.5lbs.  Still, I couldn’t believe it.  I had 2 fish for over 17lbs not even an hour in to my very first tournament day on the Delta.  In my mind every story, article, and tv show on the Delta was true.  At that moment I was packing my bags and moving to Oakley, CA. as soon as I got home.

Fishing through this first hour I quickly realized I had made some subtle but key adjustments.   By taking a moment early on in the day I noticed some things that ultimately helped me have a very successful day one.  Staying in tune with your surroundings, sonar, birds, weather, and wind can all play a huge factor on how your day will unfold.  Sometimes just using a different presentation or a different bait is all it takes.  Although the tactical adjustments were important, being able to make the mental adjustments will allow you to make the right adjustments.  Sometimes that mental adjustment is just stepping out of your comfort zone.