It’s been a beef of mine for many years.  The idea that rod terminology, especially when it comes to speed of the rod blank, is such an arbitrary thing.  What one rod maker calls “fast” another calls “extra fast” or maybe even “mod-fast”.  We would like to introduce an idea on objectively measuring blank speed – by measuring the distance above the reel seat where the rod first begins to flex under load.

The speed or action of the blank impacts everything from casting distance/accuracy to how the rod handles a fish during the fight.  As I have made the switch to using mostly braid, I have become more and more aware that rods labeled “fast” and certainly “extra fast” are not the best to use in conjunction with braid.

While discussing some recent inconsistencies in getting frog fish to the boat, we were struggling to put into words what the rods felt like under load (after hooking a fish).  Ryan was describing the intense amount of torque he was feeling on his hand and wrist (at the reel) when hooked and fighting bass that had eaten his hollow-bodied frog.  He was also only converting at about a 50% rate on getting those fish to the boat.  As we began to analyze the amount of torque placed at the reel area under load, we realized that rod manufacturers labeling of rod speeds (actions) were off (something we already knew).  But how much were they off?

Here’s two rods that I used extensively this past spring for my Swim Jigging.  Both are rated as Med. Heavy rods, with a Mod-Fast action.  When I actually measured where these rods flexed under load, the results were a bit surprising to me. 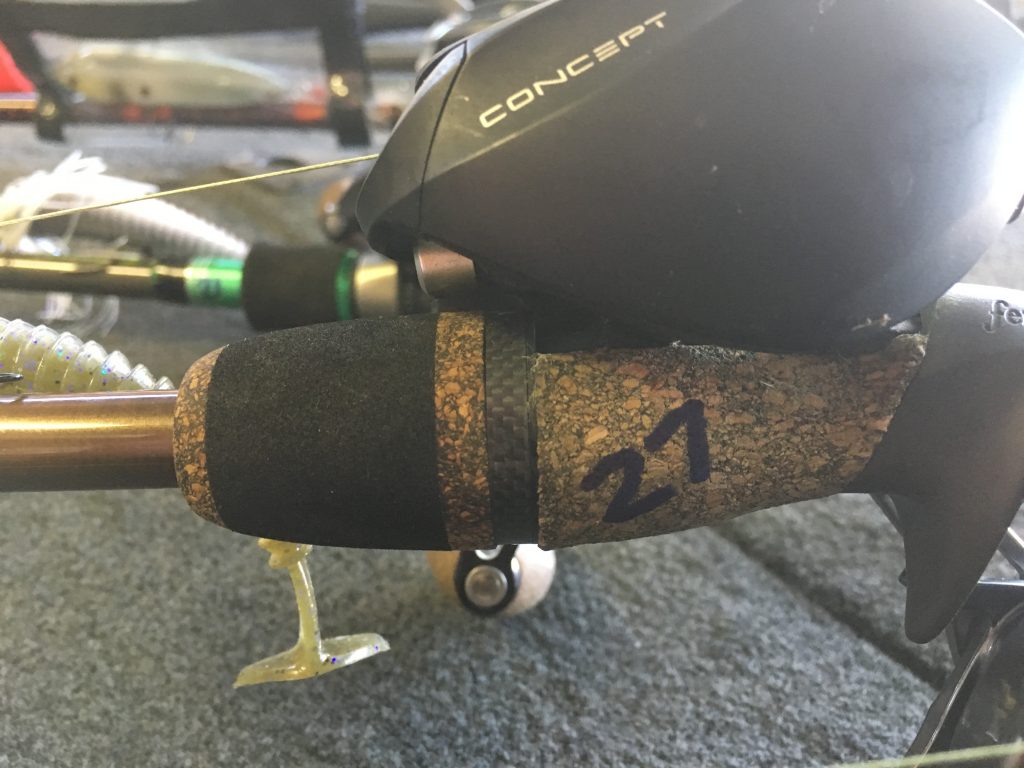 The blank locked up at 27 inches above the reel seat.  Part of the effect of that is that I, you, the angler, feel more torque in the wrist, arm, etc.  I remember catching some nice swim jig fish on this rod.  I felt more of the fish in the fight.  It was like the rod was absorbing less or the power of the fish was distributed over less of the rod and more into my hand/arm.  Below is the video of a fish catch on this rod.  You can tell I am not prepared for the amount of torque this fish makes me feel, from my wrist into my elbow.

This rod locks up at 21″ above the reel seat.  The resulting feel for the angler is less torque felt at the reel.  It seems as if the power of the fish is distributed more evenly over the whole rod instead of just in the top portion of the rod.

The Fenwick rod mentioned above is not a more powerful rod.  Its tip begins to load under less weight than the iRod (again, both rods are rated the same).  But the Fenwick is a faster blank.  It’s resistance to bend happens much further up the blank, 27″ vs 21″.

Power is measured in terms like heavy, medium, and light.  The rod action/speed tends to be measured in terms like Extra fast, Fast,  Mod. Fast and Moderate.  Rods used to be labeled as “slow”, but nobody wanted to buy a “slow” rod, so the term “moderate” is used now.  The problem is that while power usually corresponds to weights of appropriate baits to be used (1/4-1 oz. for example), rod actions are not tied to any kind of objective number.  We are left to our own devices to try to come up with a way to quantify what makes a rod “fast” or “moderate”.

Many rods today are built too “fast” for the applications they are intended for.  It is our belief that, regardless of how rods are labeled, they tend to stray to the “fast” side as more of a marketing ploy than as a practical, on the water need.  Try measuring your own rods, mark them and then re-purpose your rods for the appropriate actions based on the actual numbers not the manufacturer’s label.