“I didn’t hear anyone mention having such a fruitless day as I had – but who wants to brag?”

We were allowed to access our boats to load our gear in them the night before.  All the boats were kept in an open grassy lot on the water’s edge that was secured by some fencing and security guards.

One of the strongest memories of that whole adventure that I have is the amount of humidity in the air.  The boat seats and consoles were just as wet as if it had been raining all night.

I wiped the seats and Lowrance units off, installed my map card and began searching.  Lake Eustice, where I planned to practice that day, was a shallow bowl of a lake.  Deep was 15′ of water.

I didn’t bother pulling any rods out because it was going to be a long idle through a canal that connected Lake Dora to Lake Eustis.  One of my reasons for starting on Eustis was I wanted to experience how much time idling through the canals was going to eat up as soon as possible so I could factor that into my plans.

Prefishing isn’t about catching anyway.  At least that was what I was telling myself that morning.  I was in exploration mode and knew I needed to get comfortable with my surroundings, using the boat and the new to me electronics and trolling motor.  I didn’t want any surprises or distractions during the actual tournament competition, so anytime I could I would make sure all the livewell pumps were working, that I knew how to operate every switch on the dash and got myself comfortable on how to use the fish finders.

We were backed into the water by B.A.S.S. staff and helpers.  One thing I have to say about the whole trip is that we were given the royal treatment.  Every day, we were bused down to the lake and then got in our boats and were launched.  A bag of ice was waiting for us in the boat along with our lunch.  When we came in, people backed trailers in and we loaded the boats up and got back on the bus.

The boats were brand new 19′ Skeeters with 200 HP Yamaha’s on the back.  These were “brand new” as in they have never been fished out of before and the outboards were not broken in.

There is something pretty exciting about fishing out of a new boat and that new boat smell.  But in such a big tournament, it was a little unnerving as well.  There is a lot to be said about knowing where all your stuff is, knowing how to operate all the functions of the boat (lights, live wells, electronics).  Little things like knowing how to idle through miles of canals with a brand new outboard running thick with oil without fouling the spark plugs.

It was my goal to use each of my three practice days to explore a different lake.  The provided boats did not have any side scan or side imaging on them, so “exploration” would have to be done with regular sonar and a carolina rig or a deep diving crankbait.  This type of exploration would help find deeper rock, or shell beds, as well as help, identify the deeper grass lines.

And so that’s how day 1 went.  A combination of “exploring” and fishing.  All spent in just one of the lakes (Eustis).  I saw few other anglers in that lake that day.  I also didn’t see any bass.  But more telling, I didn’t see any life.  Gators, birds, other fish.  Nothing really stood out.  There were miles of Kissimmee grass.  It all looked a little too neat and nice for me.  Mostly straight edges with few holes and pockets.  Not a good description of Kissimmee grass, just what I found on that first day.  While I was able to find some offshore shell beds, I wasn’t able to find any bass using them.  This bothered me because the one thing I really wanted to find was something offshore and all to myself.

I really wanted to bail on Lake Eustis after half a day, but I had told myself I was going to learn it the best I could.  At noon, I went to the bank and began looking for something that made sense to me.  It felt like I was on a giant farm pond.  I felt confident in fishing grass, but not in what I was seeing.  Too much of the same without any character and what was unique was too small to rely on for three days of fishing.

I went from working a crankbait offshore to working a spinnerbait and swimming a jig along and through the grass.  Occasionally, I would pitch some sort of creature-bait or cricket in some likely looking holes or off a grass point.

We like to tell ourselves that practice is about “eliminating water”, figuring out where they aren’t so we don’t waste time on that stuff in the tournament.  But the truth was, Eustis, handed it to me that day.  I knew enough to know that it could produce but also enough to know I wasn’t going to figure it out or force it into working for me in such a short time.

Coming off the water and loading up onto that bus brought me within earshot of more “dock talk” or “bus” and “hotel” talk as it was.  I didn’t hear anyone mention having such a fruitless day as I had – but who wants to brag?

Up to that point, I had been pretty strong and resolute in my belief that I could figure things out in three days of practice.  Now, a third of the way into it, I wasn’t feeling so confident.

Add to that was the confidence level everyone else seemed to have.  Fishermen are notorious braggers and bass fishermen a level or two above normal.  It was one of those deals where guys are telling their best big fish story from day 1 of practice.  I had nothing to tell.  A few guys asked how my day was and I replied honestly about not being able to put anything together.

This is all part of the mental tennis match that goes on when practicing or fishing a tournament.  You have to find that sweet spot or balance between being too aware of what the “dock talk” is and putting your head in the sand and not paying attention to the subtle clues around you.

I was struggling to maintain some confidence that I would figure something out.  Maybe these Florida fish were gonna get the best of me.  I couldn’t help but feel I had wasted a day of practice.  With only two days left, I knew I would have to work more efficiently.

To me, tournament fishing is all about efficiency.  It’s a different animal from just going fishing or “fun” fishing.  As long as the rules are your five best fish in x amount of time, then knowing when to stay and when to go is at the heart of the game.  There are a thousand clues that are there telling you what you should do.  But lots of times we miss those clues.  It’s usually preconceived notions and history that cloud our view of those clues.

Fortunately, I didn’t have anything clouding the clues I got that first practice day.  I would not be returning to Eustis.

Next:  Day 2 of Practice – A Little Feedback? 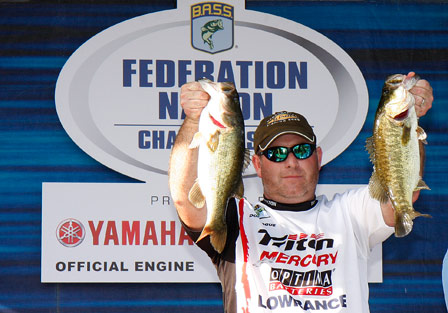 A first-hand account of what and what not to do when fishing a big tournament on a lake you’ve never seen before.