Super Fluke on the rack

It was the fall of 2000, and I was visiting a tackle shop that had just opened.  Brand new place.  Lots of brand new gear.  I was looking over their selection of Zoom Super Flukes.  They had a few colors.  As I was opening bags looking over the flukes one by one, analyzing their texture, and color, a salesman approached me and noticed my interest in the flukes.

“Great bait for largemouth!”  He said.

I didn’t have the heart to tell him that I, along with my dad, had been spending the better part of the last 3 years torturing giant smallmouth on the Super Fluke.  It wasn’t that we didn’t catch little smalllmouth with it.  We did.  Lots of them.  But nothing seemed to attract 4lb plus smallmouth like the Super Fluke.  I wasn’t going to let the secret out yet.  I figured I had a few more world class smallmouth to catch before then. 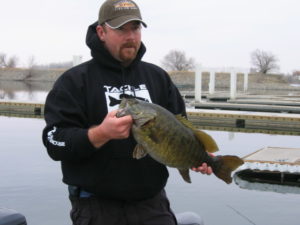 Ryan Brown with a 7+lb smallmouth

Just in my family, the Super Fluke is responsible for over a dozen six pound smallmouth.  Four over 7 lbs and one over 8.  I would challenge you to come up with a close 2nd best bait for big smallmouth.  One you feel comfortable putting into the same conversation as the Super Fluke. 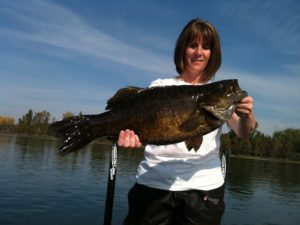 And no, I’m not getting paid a dime to say any of this.  Never gotten so much as a bag for free.  I’ve spent hundreds of dollars on them and it has been money well spent.  The amount of enjoyment per dollar makes it probably the best investment I’ve ever made.

I honestly don’t even feel like I’m bragging.  Family members and myself have put the bait into plenty of hands of the uninformed and uninitiated.  Many, have tied into a world class smallmouth soon after.

I get easily annoyed at the constant marketing that the internet has become.  One of my main motivations for starting this site was to just free myself from all the double speak and “wink, wink” back and forth that goes along with bass fishing.  So I come into this with that mindset I just described to you and without any hesitation I can say if you haven’t tried the Super Fluke for smallmouth, your are really late to the party.

An old fishing buddy and I had a standing bet.  We would fish our favorite areas, about 8 miles of river, and by noon, whoever had caught the least had to buy lunch.  I was always hungry by noon.  Which was good because I never lost the bet.  There was that one time though when by 9 am, my buddy had me beat pretty bad.  He was up something like 12-4.  Considering I usually doubled him up, this was looking like some payback.  Unfortunately, I didn’t have any money on me.  Never needed to worry about it.  So in desperation, I pulled out a Rattlin Rouge (silver, black back) and tried to make that thing looks as close as possible to all of the baitfish that I was seeing getting eaten.  Most of the baitfish were small Pikeminnows I believe (I saw a few get run into the side of the boat and even beach themselves trying to get away.  This Rouge was the closest thing I had.  Over the next hour, a comeback of epic proportions was in the making.  By lunchtime, I had double up on him again and ordered my customary bacon cheeseburger and fries a little more sheepishly than normal as I explained to him why it was a good thing I tied on that Rouge.  He didn’t feel any better knowing that I thought so little of the competition that I didn’t even bother to bring “just in case” money.  Not only today, but it had been awhile.

Later, while telling the story to my dad, we began to brainstorm other baits that might even do a better job.  That Rouge was a lot of work!  A constant ripping action and then there was the issue of dealing with smallmouth and a bunch of treble hooks!

One of the first was the Sluggo.  We enjoyed a great deal of success with the Sluggo.  We rigged it so many different ways, that it was very versatile lure for us.  Carolina rigged, split shot.    That lasted about a season.  Then came the Super Fluke.  My dad bought the first bag.  It had obvious potential – to us anyway.  I’m sure at that point it would never have qualified as a smallmouth lure.  Still doesn’t today the way you hear it from many.  But in spite of our fishing it all wrong (or at least we were fishing it in a very limited way), the lure impressed us.  Not so much in catching fish, but it seemed our average size fish went up like a pound.  We started out working it fast, like the Rouge. That worked, but it wasn’t until we started varying things up and working it in more subtle ways that we tapped into fish that we hadn’t been catching before.  We played around with other makers of the same lure.  Just wasn’t the same for us.  Something about the texture, the salt content.  The way it would fall on slack line that made the Super Fluke special.  Of course, it could have just been our brilliance, but we’ll get into that later – as in a future post.  For now, below is a few shots of the early years. 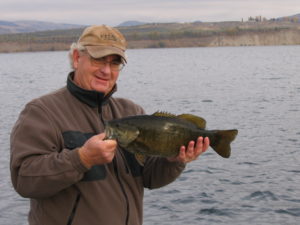 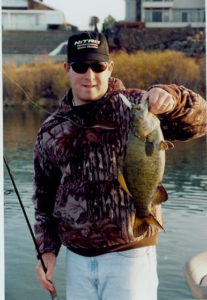 I guess I just wanted to pay homage to a lure that has meant so much to me over the years.  A small group of us (an inner circle if you will) has spent many hours over the years tinkering with the best way to fish it.
The time of year.  The locations.  The best hook to use.  The best line.  I even had a special rod built just for the Super Fluke.  The “Fluker”.  We’ll get into that later as well.

While I’ve heard it’s not the best bait to use on some bodies of water, the SF has been a star on every pool of the Columbia it’s ever been on.  Banks Lake.  Moses Lake.  Potholes.  All the Snake River pools.  My very first cast at Lake Shasta was on the SF – and it caught a 3 pound smallmouth.

You will hear plenty about the SF from us on this site.  Might even get tired of it.  That’s okay.  If you ever have “one of those days” with it – you’ll understand.