A look at a few of the primary patterns in June for this popular tournament destination.

Whether guarding fry or bed guarding or feeding up after the spawn, both largemouth and smallmouth at Moses will respond well to a frog during the month of June.  Don’t be suprised to catch an oversized smallmouth by “accident” with this technique.  However, do expect to get your heart-broken at times when that 6 pound largemouth comes off despite your best efforts.  It’s still worth your time to turn out the hooks a bit and revisit that settings on your drag, but even with all those precautions in place, frogs are still notorious big bite getters and big bite losers.  If you have a frog in need of some fixin’, take a look at this video from Ron Hobbs Jr.

Flipping/Pitching is about the all too often used phrase of “grinding”.  The ratio of bites to presentations is the lowest of any technique out there.  The ratio of weight to bites is among the best.  Some see this as a patience test, but mostly flipping/pitching is about confidence that you are doing the best thing for the biggest fish over the long haul.  Stealth, boat position and knowing how to recognize and plan for those key stretches of tulles, docks and laydowns will separate the men from the boys in this area. 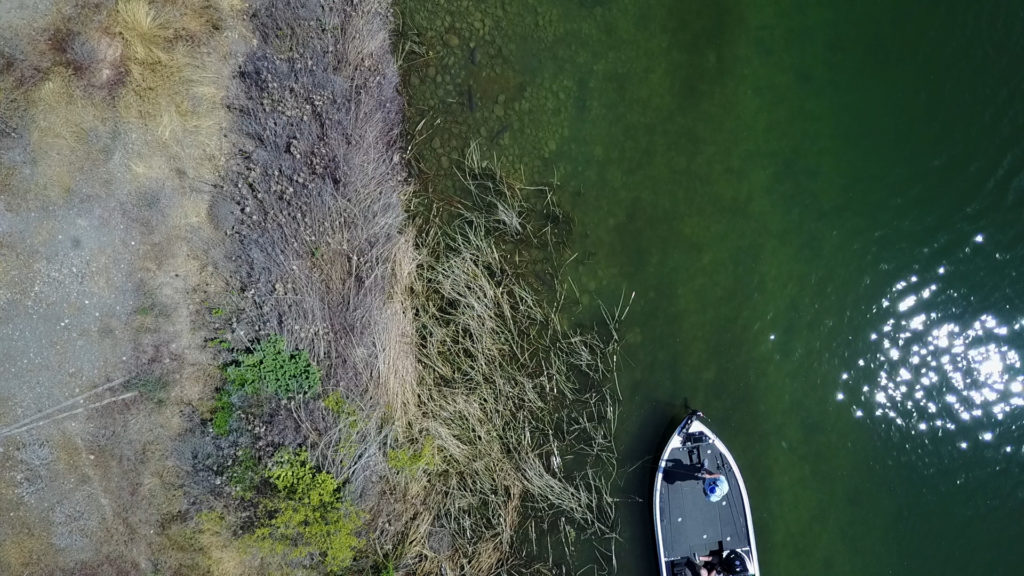 Both largemouth and (a few) smallmouth will remain on beds in the month of June.  Think more main lake for most of these late spawners.  If sight fishing is your thing, there will still be plenty of that action to be had.  Like its cousin to the south, Potholes Reservoir, Moses Lake can be frustrating at times in regards to seeing bass, but not getting them to bite.

Most of the smallmouth population will be in post-spawn phase.  That means a combination of fry guarders and females needing to eat.  For many, this is prime topwater time.  Following emerging weedlines out to the first break or search along that inside weedline for alleys and rocky areas that will support a mixture of prey fish and crawdads.

Early June can be a volatile month in eastern Washington.  Scorching heat one day, followed by temps that top out in the 60’s or 70’s.  Rain, wind and thunder storms can also impact the best laid plans.  Best advice here is to be prepared.  Run through different weather scenarios in your mind before arriving.  Especially when it comes to wind direction and what your best angle/direction of approach should be.  The same can be said for the sun angle and what kind of shadow you will be casting on the water.