While we had caught a couple of fish in the time between fish #2 and #3, none of them would end up making the grade.  We were sticking to our plan…fishing fast, slow.  Rotating between pitching a jig and swimming a jig.  Occasionally, working a perch colored swim jig in the mix and catching a few on that, but not any that would be part of the best 5- yet.

Shortly after noon, we made a move on the big motor to an area we had begun working the year before.  At this point our best 5 went for about 24 lbs and we started talking about was this going to be another banner day like we had several of the past couple years in the early spring.  The mark for us to beat was 31.5, which we had accomplished at the end of March the previous year.  We had talked about that day a lot, and both of us felt it probably wasn’t a mark we were going to break.

We moved through a bottleneck trying to reach the backside of a dune top that had been good to us the year before.  Ryan was on the left and I was on the right as we often are.  We are both right-handed but Ryan has perfected this back-hand roll cast and so that is often how we fish together on the front deck.

As we crossed the bottleneck, the willow line to my right forms a subtle point, with a subtle pocket behind it.  It’s a spot where last year when we entered the same way, with Ryan on the left and me on the right and I would throw out across that point pocket and catch a smaller male that would hit the jig so quickly you could hardly engage the reel.  Probably a male guarding his turf.  So I am remembering this as we come into this area and I almost didn’t make the cast.  Almost like I didn’t want to catch a small fish again.  But at the last second I decide to make the cast and, well, you will see the rest in the video.

Take a look at this fish though and tell me what you think.  Length and head size, I think it was the biggest fish of the day, we were both impressed with it right away, more than the other big ones that day.  In the video, you can sense we are both pretty excited about this fish and as there was another boat within eyesight of us, we revert to our old “tournament mode” of whispering through our excitement.  We both thought the fish was over 7, but as we were weighing it, we noticed how skinny and “spawned-out” she looked.  There could have been something else going on with her.  One possibility is some research I’ve read several times from biologists who have studied bass and spawning and report that not all females spawn every year.  Maybe that was her deal?  Was it even a female?  There’s still so much we don’t know.

One last thing.  This fish gets me wrapped up or buried in some willows right away which is a common event at Potholes.  So I was pretty lucky to get that one in.  I was impressed with how the rod handled that fish and that is a scenario where you want power to move the fish out of the cover, but you also want a moderate taper that keeps the rod loaded so that whatever power that rod has to give is delivered evenly through the whole fight. 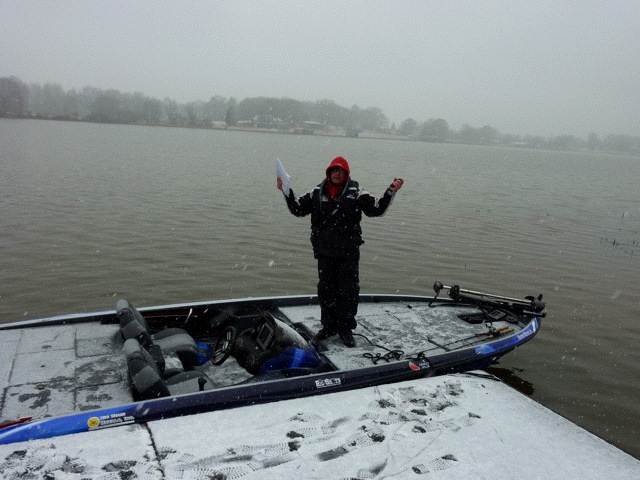 Learn four different areas that you can improve as a bass angler this offseason.