It might have been the 10th annual Nixon’s Moses Lake Open, but it seemed like Groundhog Day to many participants and those in attendance as Aaron Echternkamp and Dave Kromm captured their 4th title.  If you are keeping track or following along here, you’ll note it was their 5th time making the cut into the top ten on Sunday and their 4th victory.  4 for 5 ain’t bad!  As mentioned before, if they make it into Sunday, watch out.

Echternkamp and Kromm while coming out on top, (22.16 on Sunday) didn’t exactly run away with it.  Mike Wolsky and Ron Hobbs challenged every step of the way finishing just less than .2 away in 2nd with a total of 21.97 on Sunday.  Levi Meseberg and Kelly Ross rounded out the top 3 only a pound out of the lead (21.13).

Not a coincidence that the top 3 teams were among the top teams all time in making the cut coming into this 10th annual version.  Hobbs and Wolsky made it their 5th consecutive cut, and Meseberg and Ross were making it their 6th cut total over the 10 installments.  Marc Lippincott and Chris Treffry also made this event their 6th time into the top 10.

Nearly all of the top 10, and certainly the top 3, worked hard to maximize their largemouth opportunities while mixing in some time to go after some of the bigger bedding smallmouth.  Wind, sunlight (sun positioning) and working areas that hadn’t been worked too hard already were all variables that those teams seemed to handle better than others.

On Sunday the field of 10 seemed to spend most of the day working different sections of the lake, with nearly half spending extensive time up north while the other half seemed to focus on the southern end.  A few in the group could be seen working both sections.

Most of the top 10 seemed to focus on sticking a “kicker” largemouth (or two) early in the morning and then by midday, many where trying to fill limits or upgrade with some of the oversized smallmouth that were coming in droves to bed.  Patience seemed to be a deciding factor as Echternkamp and Kromm worked a small group of bigger fish for several hours, while most of the rest of the field seemed to be moving at a more brisk pace on the trolling motor or picking up and moving several hundred yards on the outboard.

While there weren’t any giants weighed in on Sunday, it should be noted that Echternkamp and Kromm’s big fish of 5.99 compared with Wolsky and Hobb’s big fish of 5.27 more than made up for the difference (.2 of a lb.) in the two team’s final weights on Sunday.  Those are the kind of fish the nearly everyone was after, and most believed that the largemouth would more likely provide that type of size over the smallmouth.  The gamble that is inherent in that strategy however is that you miss a chance at a four and half pound average per smallmouth if the bedding smallmouth aren’t fished for more efficiently or at all.  There were large swaths of unmolested smallmouth sitting on beds Sunday that had little to no pressure as most of the field felt the urge to try to connect on a 6 plus pound largemouth.

Wolsky and Hobbs had the largest bag on Saturday with over 23 pounds of smallmouth, while eventual winners, Echternkamp and Kromm brought in all largemouth for over 23 pounds as well.  Missed opportunities, lost fish and not getting certain bedding fish to go where common themes on day 1.  Wolsky and Hobb’s bag of brown fish seemed to stun the crowd as many believed that weight could only be accomplished by a mix of largemouth and smallmouth or just a solid bag of “green ones”. 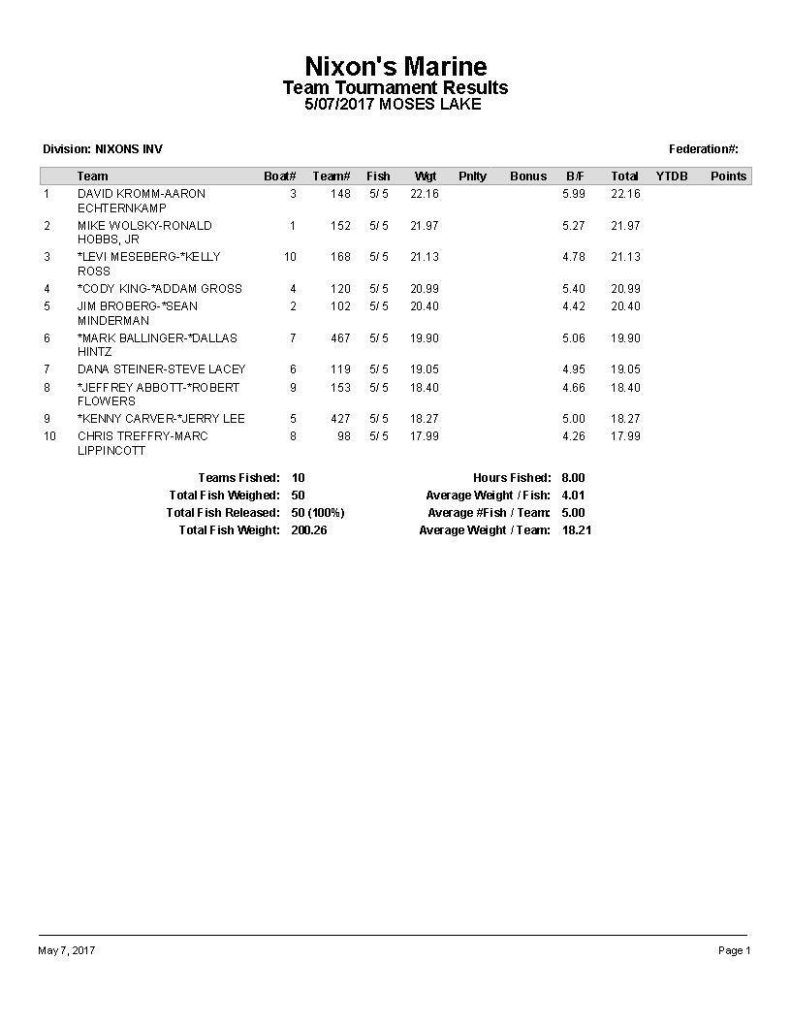